David Lynch and me

Whilst driving home earlier today, i receive a text saying

” i just drove past david Lynch , sitting on hollywood and LA brea, with a cow.. he was just sitting there.. I cant believe i didn’t stop and take a picture. I don’t think anyone knew who he was or what was going on..Fuck!”

In a moment of non-apathy.. i text back

(to myself :..yea right…like ill drive through 430 La Brea traffic to take a picture ..)
she texted back..

Then , quite unlike the lazy un-adventuresome person i’ve become.. I find myself.. whipping a bitch.. weaving through the unrelenting LA Labrea/highland/hollywood Blvd. traffic and pulling in to a strip-mall, adjacent to Mr.Lynch’s Inland Empire pr action.
yet, despite my traffic weilding effort -at this moment my thinking was still true to my L.A. lamebrain-ness, ..

‘well..i don’t really need to go across the street…it’s too embarrassing, i’ll just take a picture from over here..’

..but( thank goodness) I was obviously under some awesome spell…. because no sooner do i find myself crossing the street, and approaching the few making the scene..
but coming away with 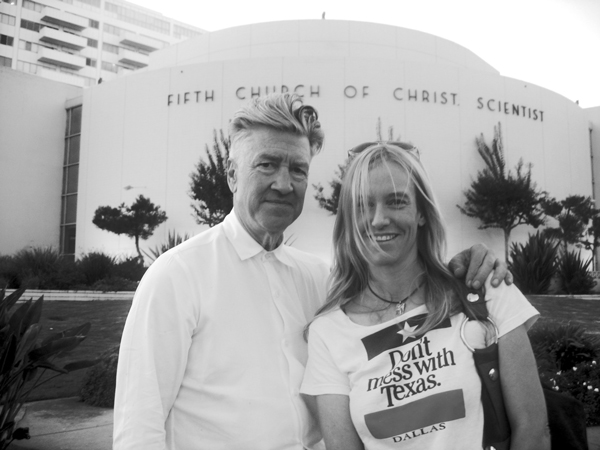